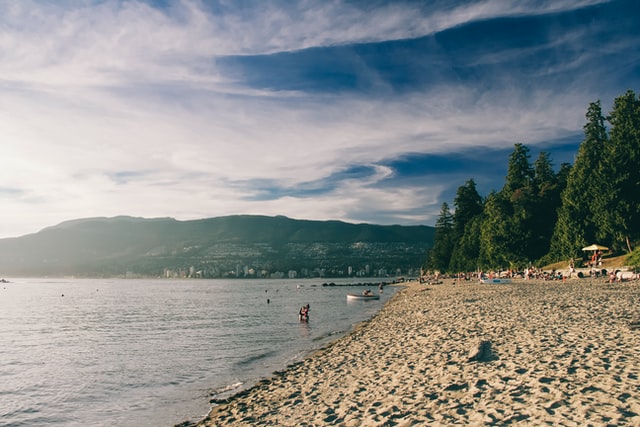 Vancouver is a beautiful city offering anything anyone could need – alright we might be a bit biased, but it does still include the very best of the pacific west coast. There is no reason to head to the southern beaches of California when we have all the sand and heat we need right outside.

This summer has already been a hot one and it shows no signs of slowing down. Embracing the best of this weather is easy done at 7 Vancouver beaches which we highly recommend  – yet another reason to have yourself a staycation in this beautiful city!

“Kits” Beach as it is locally known is one of the most popular beaches in Vancouver. There is even a bit of free street parking to be found … right here… in Vancouver!

English Bay can get a bit busy, but that is only because of its amazing location right downtown and part of Vancouver’s West End.

Clothing is optional at Vancouver’s famed Wreck Beach, making it a unique visit for some. It is located at the end of the University of British Columbia (UBC) in Pacific Spirit Regional Park. In typical record-breaking style, Vancouver’s nude beach holds the record as the largest in e in all of North America!

If your last beach trip and book were interrupted by someone’s backpack blaring The Weekend, you may want to head over to a little spot between UBC and Locarno Beach, where amplified sounds of any kind are not permitted. Spanish Banks Beach is a peaceful place ideal for photos and family events.

Originally known as iy’a’l’mexw in Squamish, Jericho Beach is located just west of Kitsilano. Its oceanfront sandy beach is met with an exceptionally manicured park which on it’s own is something to behold.

Vancouver got right to the point when we named Stanley Park’s sunbathing real estate. Third beach is located at Ferguson’s point in Stanley Park and is a great place to catch the sunset.

Second Beach, also in Stanley Park, and comes with an outdoor pool and waterpark (including a waterslide!) – all on the beach! Second Beach is where family fun meets stunning oceanside views!